Thousands of years from today, geologists will refer to our current era as The Plastic Age. Instead of stone bowls and bronze arrowheads, they’ll be digging up plastic coke bottles and yoghurt pots. This isn’t just a thought-provoking analogy – it has actually been suggested by scientists and academics. All for a material that’s only been around for 70 years! 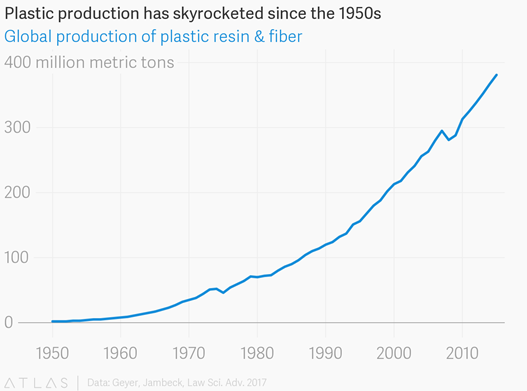 Plastic production has skyrocketed since World War II. Over 400 million tonnes of plastic were produced in 2015 – equivalent to the weight of the entire human population. And it’s not going anywhere. None of the commonly used plastics are biodegradable. Rather than decompose, they accumulate in our environment. Only 9% of plastics ever produced have been recycled, and even then, we are only delaying their journey to landfills or oceans.

How did it come to this?

In 1907, Leo Baekeland, inventor of the first synthetic plastic, remarked “Unless I am very much mistaken, this invention will prove important in the future”. That was an understatement. The amazing qualities of synthetic plastic changed history. It was cheap, versatile, moldable, light and indestructible. Soon it would be used in everything – telephones, radios, guns, coffee pots, billiard balls, even the first atomic bomb.

But, where plastics have really taken off is in the packaging industry – the largest market for plastics. The problem is, we use water bottles and other single-use containers for 20 minutes, and toss them. Then they hang around for hundreds of years. It could even be thousands. Plastics have only been commonly used for 70 years, so we really have no idea.

Every plastic bottle you’ve ever used still exists on the planet in some form or another.

Food and beverage manufacturers defend throwaway plastics as the most convenient and flexible way to store and transport goods. It certainly helps them save money on freight costs and inventory cycles. But guess who’s footing the bill for the landfills and recycling centres to deal with our growing mountain of plastic waste? No wonder your council tax is always increasing.

And then there are the environmental costs. A recent investigation by Orbmedia showed more than 80% of global tap water contained plastic. This is bad news. Plastic microfibres have been shown to absorb toxic chemicals linked to cancer and other illnesses, and then release them when consumed by fish and mammals. Watching David Attenborough’s Blue Planet II documentary, it’s hard not to tear up when seeing how plastic is killing our marine life.

There’s no doubt that plastic is an incredible invention that, in many ways, has changed our world for the better. But the very thing that makes them useful – virtual indestructibility – also makes them costly to our environment. It’s time to re-think throwaway plastics. for ideas and tips.

Want to reduce your plastic footprint? Head to Kempii for ideas and tips!

References:
[1] “Production, use and fate of all plastics ever made”, by Geyer, Jambeck and Law, Science Advances.
[2] “How Plastic Became a Victim of its Own Success”, by Tim Harford, BBC.
[3] “Invisible, The Plastic Inside Us”, by Tyree and Morrison, Orb Media.

Published by Zero In On Waste

View all posts by Zero In On Waste